On February 11th the annual Thaipusam [wikipedia.org] festival took place here in Singapore. The festival, celebrated mostly by Tamil Hindus, is a celebration of the birth of Lord Murugan [wikipedia.org] and the day his mother, Pavarti [wikipedia.org] gave him a spear to vanquish a demon.

Whatever the details are about the origins of the festival the striking feature of the festival to an outsider today is the Mortification of the Flesh associated with thevel kavadi, vel meaning spear and kavadi meaning burden. The vel kavadi is basically a portable alter carried above the head and shoulders and attached to the body by a number of vels piercing the flesh.

While there were a large number of vel kavadi, some up to two meters tall, there were also a lot of other types of mortification. Some people had small hooks in their legs, back or chest each attached to an orange or lime. Others carried kavadi but rather than having them attached by spear like vels they had them attached by hooks on ropes or jeweled chains.

I understand that the festival is outlawed in India and the largest festivals today are in Kuala Lumpur, Malaysia, Penang, Malaysia and in Singapore. As one of the guys hanging out with me the day of the festival said: ‘this is the most interesting thing to happen in Singapore.’ Posted a the first of many photos from my recent trip to Paris and Japan. I’ll post them a few at a time as I get them cleaned up. I have about 20 gigabytes of photos from the three week trip.

These first few photos are all of the Eiffel Tower at night, most of them are taken through the ‘Wall for Peace’ which is situated at the far end of the Champs de Mars from the tower. I actually went to the Singapore Botanical Gardens [wikipedia.org] way back in January but and just now getting my lazy ass around to posting the pictures. They are not the most artistic pictures I’ve ever taken but if you like flowers take a look. 90% or so of the pictures are actually of orchids, but there are a few other plants, bromeliads and a Venus flytrap [wikipedia.org] even.

I used to know a guy who grew 15 or more species in his house in C’ville. He had orchids in the bathroom, orchids on the steps, orchids everywhere. Of course this guy was a transmission mechanic by trade, a molecular biologist by education, and a founding member of the Elvis Grotto caving society. Strangest thing was the large black and while profile of the king himself that was spray painted on the hood of this guys 1971 Land Rover. Very strange. He used to go to ‘orchid society’ conventions and little old ladies from around the world whom he had only met briefly in Vegas or New York while at these conventions would call him at all hours to ask about growing this or that orchid. Very strange indeed. Various pictures from my Marine Reef Tank. Taken in Spring 2004 when it was in my apartment in DC and I was just playing around with my new toy—My digital camera.

N.B. the following has a lot of undefined terms in it that require some expertise in either marine biology or tropical fish/coral keeping. I was going to define some of the terms but it would take too long and I did not find any good web pages to link to for explanations. Wikipedia failed me on this one…

The tank itself is quite old, nearly 12 years. It’s moved several times, from my place to my parents’ basement when I went back to college after working in the fish store for two years. Then to My apartment in DC and most recently to my bosses’ house for him to take care of and learn ‘art of reef tank maintenance’. The sad fact is he is doing a better job of it than I was, because he pays better attention to it. Keeping a salt water reef tank is really not as hard as all the rumors would have you believe. It just takes diligence. A few weeks of neglect in a healthy tank is not too hard to recover from but if you go on too long it starts to reach a point where you have to fight to bring it back. My tank has reached that point several times. But despite my failures as the lord of the tank there are several inhabitants that have been residents of my tank for quite a while; the ‘old man of the tank,’ (the gray and black fish with the blue spots,) has been in the tank 6+ years. There is also a starfish older than that and a frogspawn coral that is about the same age. The frogspawn is the one featured in most of the pictures of coral in this set. It’s a light brown and green member of the Euphyllidae family of corals. The green color makes it look quite nice under the ultraviolet light of the actinic blue power compact lights on the tank. 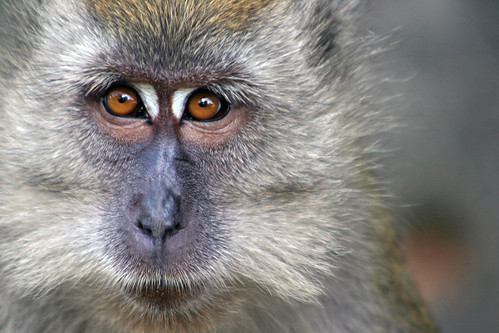 This is my favorite picture of of the da monkeys [confusion.cc] series. The eyes are a bit haunting and it reminds me of something out of National Geographic. I wish it was just a bit sharper, but hey, give me a break I took the picture at full zoom with a 80mm-300mm lens and no stabilizer, just my hands.

Saturday we went to see the monkeys! One of the visiting guys from work wanted to see monkeys! So my girlie played tour guide to four of us and drove us up to the Upper Pierce Reservoir, right smack in the middle of Singapore. There along the road, being fed by some drivers—watch out you’ll get caned (or just fined actually) if they catch you feeding the monkeys!—was a group of Long-Tailed Macaque‘s [wikipedia.org]. Photo op! Nuff said… now look at my monkey!

Took some pics last night down on the National Mall while a storm was moving through. Most of the fireworks were over by the time I got there so I did not get the best pics, but here are the two I liked most: