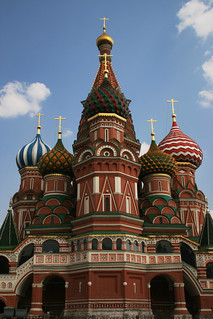 What can I say about Moscow that I have not already said [confusion.cc]? Well I really only had a few days to look around, the rest of my time was spent working. The main attraction, the must see, was Saint Basil’s CathedralRed Square [wikipedia.org] and the Kremlin [wikipedia.org]. These sites are the first things that come to mind when one things of Moscow, or indeed of Russia.

The first stop was the Kremlin, no bags allowed so only take the camera lenses you think you will really use. Ah… the once (an future?) beating heart of communism and home of the Tsars. Of the 5 churches or cathedrals on my ticket 4 were open the day I visited — the fifth seemed to be under renovation. Unfortunately you cannot take photos inside any of them. A pity as they are beautiful. Covered floor to ceiling with portraits of saints and martyrs in vivid or faded colors. Giant iconostases [wikipedia.org] gleaming in gold and silver. In the Cathedral of the Archangel [wikipedia.org] I listened to a quartet sing classical Russian Orthodox hymns, I should have picked up the CD.

Outside the walls of the Kremlin is of course Red Square. It’s easy to imagine the giant square echoing with the stomping of the Red Army’s soldiers and the rumbling of it’s missile trucks as they pass Lenin’s Mausoleum [wikipedia.org]. It’s a strange feeling standing in front of Lenin’s Mausoleum where Stalin, Khrushchev, Brezhnev and the other leaders of the Communist Party surveyed Red Army during the Cold War. I was in middle school when the Berlin Wall fell and Gorbachev’s glasnost [wikipedia.org] and perestroika took hold so I guess I am in the last generation to see the Soviet Union as the Cold War foe and standing at it’s heart was surreal. 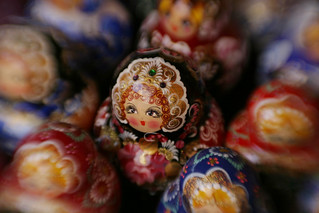 One of the things I remember most about the last year of the USSR is a political cartoon in an insert to my 8th grade yearbook showing a Russian babushka lady picking up the last potato in an otherwise empty grocery store and wondering why she waited in line for days. One of the symbols of that era forms the eastern side of Red Square: The GUM department store or State Universal Store [wikipedia.org] was, according to my Lonely Planet guide, once the epitome of all that the political cartoon in my year book was poking fun at. However today the long lines and empty shelves of this gigantic Victorian building built between 1890 and 1893 are long gone. The windows of the Moscow St. Pancas are filled with Louis Louis Vuitton and other brand names. Capitalism has won…

Much more famous than the GUM however are the colorful onion domes of Saint Basil’s Cathedral, more properly called the Cathedral of Intercession of the Virgin on the Moat. The Cathedral dominates the psyche when one thinks of Russia, at least for me, more so than any other one thing. The inside of the cathedral is a bit of a let down, the rooms are all small and sparse. A few iconostases reside in the larger halls and some icons in other rooms but the inside is no match for the colorful and exuberant outside. Saint Basil’s is without doubt the one thing I wanted a good photo of. And I am disappointed with those that I took, perhaps one day I will travel back. Hopefully in the summer.

After a day in and around Red Square I spent a day at the Izmaylovo or Vernisazh Market just near my hotel (which by the way was massive with 5 buildings, I was in Alpha, and was build for the 1980’s Olympics). This market is somewhat of a tourist trap and is not a locals market, though there were a number of Russians there most of the real shoppers were tourists and the goods on sale are typical tourist goods: matryoshka dolls [wikipedia.org], Lenin and Stalin watches, Soviet Army uniforms, and the like—and a lot of old antiques. All that aside it was a fun day and I got a lot of presents of others; including a 20 piece matryoshka doll for home. 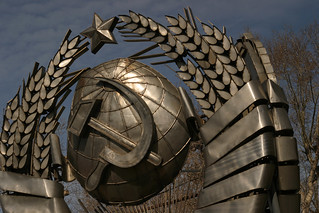 The rest of my weekend wanderings in Moscow are not worth writing about. Most of my weekday time was spent in the low rise semi-industrial outskirts of the city dominated by sullen communist era boxes of apartment buildings.

You can see the whole Moscow, Russia, March/April 2007 photoset on Flickr [flickr.com].