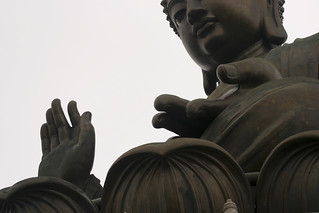 Hong Kong has always been a surreal place in my mind. Associated with all that was the British Empire, filled with the shadows of the Triads, and overflowing with commercialism. The opium dens are long gone but after spending a weekend in Hong Kong I’m happy to say it has not lost all it’s mystical status in my mind.

I didn’t spend a lot of time in Hong Kong so the parts are saw were limited to the big sites: Ngong Ping on Lantau island and it’s Giant Buddha [wikipedia.org] as well as Victoria Peak [wikipedia.org]. Rode the Star Ferry [wikipedia.org] across the harbor and wondered the streets of Mong Kok looking for bargain and good photos.

Victoria Peak was fun, the view is wonderful—though the constant smog kept it from being beautiful—but the trip up on the Peak Tram [wikipedia.org] with it’s 45 degree upward climb was the best part. The buildings seem to grow out of the slope at a 45 degree angle. A bit scary on the way down as you plummet slowly down the same 45 degree slope—backwards! 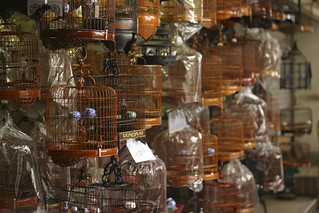 The big Buddha on Lantau also suffered from the problem of smog. Up on the Ngong Ping Plateau you can’t tell where the smog ends and the clouds begin.

In the end the best part was wondering around the many street markets near the hotel in Mong Kok. The Lady’s market, Goldfish market, Flower Market and Bird Garden were all within a few minutes walk. I really enjoyed the Bird Garden with it’s wall-to-wall bamboo bird cages and the constant cacophony of songs. On the other hand I really don’t like the fact that these hundreds of birds are caged for their song. And while the owners and shop keepers seem to dote on them I can’t help but feel sad that the caged bird must sing. 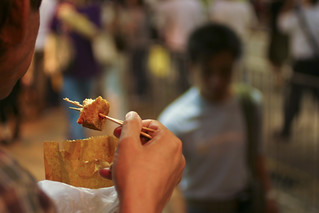 And then there’s the food. Most of the famous Hong Kong street food is outside the realm of my menu being a vegetarian but there seem to be a decent number of vegetarian restaurants and those that I tried were good. The most adventurous I got with food was chòu dòufu [wikipedia.org] or stinky tofu… an offensive smelling lump of deep fried soybean goodness. Smells like rotting vegetables, tastes.. ok. I’ve even gone out and had some here in Singapore since I got back. If you get it fresh out of the oil and hold your nose it’s not half bad. Now how long till someone makes a durian stinky tofu puff?

You can see the rest of the Hong Kong SAR, China, May 2007 photoset on Flickr [flickr.com].