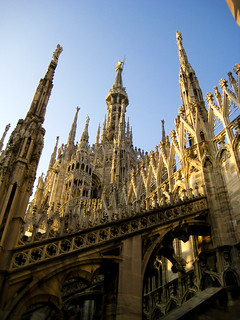 We arrived early in the morning an had an adventure trying to get enough small change to buy tickets for the train from the airport from the automated machine. To get enough small change we had to get coffee from a cafe (and the first cafe turned us away as they did not have enough change for our 20 Euro note—this was to be a reoccurring theme while in Italy, everywhere we went people were asking for exact change or smaller notes. This was mostly annoying but in some places it was a problem, if I had had smaller change I would given it to them, I didn’t!) Even after drinking our espresso and latte we still needed more change so we went to a shop and got some bottled water for the train ride. 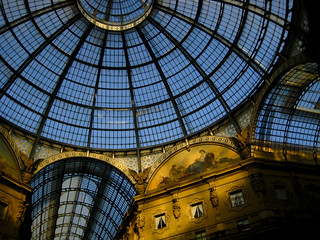 After navigating the train and metro system we checked into our hotel and attacked their breakfast. Like having correct change, hotel breakfasts were to be a reoccurring problem. Candice was not impressed by them and she was distraught at the thought of the same thing every morning for almost a month but we only had Chinese for dinner four times in three weeks so I think we did well.

Our hotel was not quite two blocks away from Piazza del Duomo. This made the first stop easy enough; The Duomo of Milan [wikipedia.org]. The Duomo is impressive, being one of the largest and tallest cathedrals in the world. The vast open space of the inside is truly awe inspiring.

After exploring the insides of the Duomo we stopped for lunch near the Piazza and then visited La Scala [wikipedia.org] and spent some time listening to a symphony practice the works of Toscanini [wikipedia.org]. 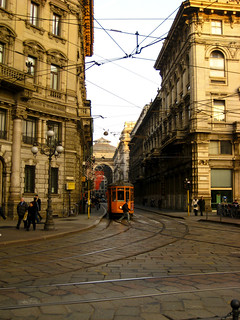 We didn’t actually spent a lot of time in Milan, we went to Como [wikipedia.org] and on a train ride to Switzerland on the second and third day we were in Italy respectively. And on the forth day we were off to Verona and Venice.

Unfortunately one of the downsides of going to Italy in November is that the sun sets at 4:30. Most of the major sites close an hour before sunset or at sunset so it is hard to visit more than a few things in a day. Fortunately La Scala and the Duomo in Milan are close enough that after La Scala we returned to the Duomo to take in the sunset from the roof. The roof of the Duomo is magnificent, a must visit site. Even packed with all manner of tourists the site is awe inspiring. Every inch of the spires and buttresses of the Duomo are covered in carvings creating a magical playground unlike anywhere else I’ve ever been.

As I said earlier we visited Como and spent a day to ride the train through Switzerland (to Geneva and back to Milan) while staying in Milan are at the start of our trip. So the only other site we visited in Milan in the first few days was the Castle Sforzesco [wikipedia.org] which contains some nice museums. Worth a visit but not much to shout about. Anyway, there are no photos from the museum (or many from Milan for that matter) because of what happened on the way to Verona: someone stole my camera bag and all my camera equipment while on the train to Verona. Partly due to my own stupidity but this threatened to kill my mode for a few days. I did manage to put it aside and enjoy the rest of the trip but still feel sad about the photos that could have been. Candice was nice enough to let me use the Canon Ixus 75 I purchased for her for the trip. But it was not till Rome near the end of the trip that I was used to it enough to take a number or good photos. Everything you see posted to Flickr in my Italy sets is from the Ixus. This explains the lack of photos from Milan and Como as I was using my 40D not the Ixus, we only took a few snap shots with the Ixus.

As I said before I turned out to be a good thing that we returned to Milan for our flight back to Singapore. I managed to revisit the Duomo (including the roof—this time early in the morning) to take a few photos and even though they are not what I would have liked it is at least something. 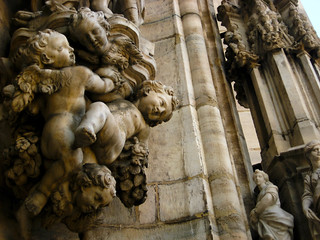 The only other thing we did when for the day we had back in Milan was to visit Leonardo’s The Last Supper at Santa Maria delle Grazie [wikipedia.org]. Candice was not impressed and I don’t blame her. I was quite disappointed because the ‘tour’ you have to buy a ticket for in advance includes nothing but the painting itself. And while I enjoyed the tour the first time I took it with A—– in 2002 I felt cheated this time. The first time I went there was a guide who explained the history of the painting and talked about the symbolism making the whole tour much more meaningful. This time there was nothing. Just a room with a fresco. I don’t know if the guide the first time was a fluke or if this time we visited on a bad day or maybe they have decided that since the Da Vinci Code was so big they don’t need to have a guide. Whatever the reason I was disappointed and I have a hard time explaining to Candice why I enjoyed the painting so much.

That covers the sites we visited in Milan but a few words must be said about just walking the streets of Milan around the Piazza del Duomo. Streets filled with shops in the name of every major and minor fashion house in the world. The Galleria Vittorio Emanuele II [wikipedia.org] and other less known streets are amazing just to walk. Downtown Milan seems much more a living city than any of the others we visited (except maybe Rome) and it actually feels like people live there not like the glass bubble of Venice or the postcard vistas of central Florence.

You can see the whole Milan, Italy, November 2007 photoset on Flickr [flickr.com].