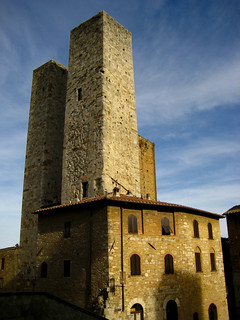 High up on a hill overlooking the beautiful Tuscan [wikipedia.org] countryside, San Gimignano [wikipedia.org] is one of the most beautiful cities in the world. Really San Gimignano is not much more than a village despite the fact that some seven thousand people call it home year round. With one main street within the medieval walls it’s not a big city.

However, San Gimignano was the most ‘authentic’ medieval Tuscan city we visited. Maybe it was the lack of large crowds of tourists (there were tourists, in fact quite a number compared to the locals we saw, but the city most definitely did not feel crowed.) Maybe it was sitting on the main square having coffee and people watching. Maybe it was the food… ok maybe it was not the food..

After navigating our way to the bus station early in the morning we were dropped off by the first bus at a small stain stop in the town of Poggibonsi [wikipedia.org]. After about 45 minutes the bus that would take us up into the hills to San Gimignano arrived at Poggibonsi to save us from the freezing train station. 30 minutes of climbing into the hills later we arrives just outside the gate to the medieval city. Just before 11 AM (this despite getting up at 5 AM!) 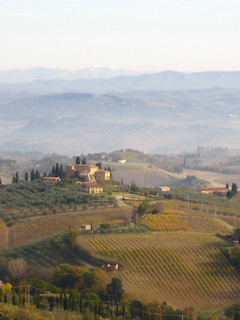 We did not really do much hardcore sightseeing in San Gimignano. More wondering around the streets punctuated by lunch and coffee. Lunch was an interesting ordeal. At about 11:50 we selected a nice looking restaurant along along the main street. When Candice stuck her head in to ask if they were open (it was not obvious to us) it took a few tries for us to understand that they opened at noon. Wait 10 minutes? No problem. Too bad that no one had told us that it was 10 minutes by Italian country time…

30 minutes later after much wondering around the few shops near the restaurant we finally had lunch. It was OK but not worth the buildup.

It did not really matter that the food was only mediocre. The city was so beautiful and peaceful that it was a pleasure just be walk around and sit in the piazza and enjoy a cup of coffee… and a cup of ‘cioccolata calda’ which means hot chocolate but is so much more. Good cioccolata calda is literally melted chocolate bars, served steaming hot! It warms you up all the way down, you can feel it sliding down your throat. So good. Can’t possibly be good for you. I drank a lot of it while in Italy. 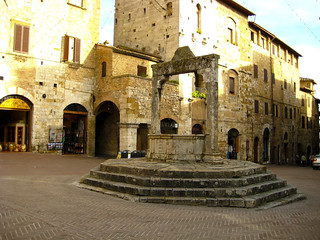 San Gimignano was a wonderful place and I would like to see it in the summer when the rolling Tuscan hills are in full bloom. But I understand that the city is overrun with tourists all summer. I think that would destroy the magic.

You can see the rest of the San Gimignano, Italy, November 2007 photoset on Flickr [flickr.com].

Brian, thanks for releasing your photos under a CC license! I used one of them in my non-profit photo-virtual-reality project: http://openphotovr.org/index.html#a92 (with attribution, of course). It’s a great image.