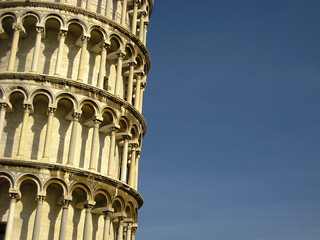 Our adventure began on the train to Pisa. We rode a packed commuter train rather than the faster direct train and most of the passengers were locals. A good percentage of the standing crowd changed at each stop. There were two other tourist couples in the car with us which became apparent when the conductors came through to check tickets. Our carriage was near the middle of the train and a few minutes past the second of third stop the conductor lead about five young guys into our carriage all waring street clothing but with conductors hats and the automated ticket machine and punch.

Pisa is, of course, famous for one thing [wikipedia.org]. That one thing is on the far side of the medieval town from the modern train station, a 20 minute leisurely walk. Since only a set number of people are allowed in the Tower each day in small groups we marched directly from the train station to the ticket booth with only a short stop to purchase more storage for the digital camera. 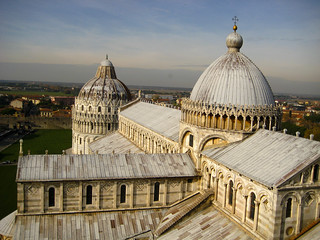 Upon entering the Piazza dei Miracoli [wikipedia.org] I was driven to repeat the great words of The Flugie saying; “it’s slanty!” (Guess you had to be there the first time.) Not so bad as it used to be mind you since they spent a lot of money and a lot of time to pump mud out from under it in order to get it to stand back up a bit straighter.

Anyway, beyond the world’s most famous engineering mistake the Piazza dei Miracoli also holds the Duomo or Cathedral and the Baptistry of St. John [wikipedia.org]. We didn’t visit the Baptistery but the Cathedral is beautiful, not the best in Italy but beautiful. 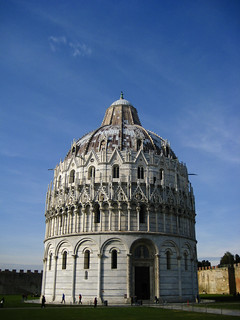 After the Tower and Cathedral we took a slow walk back to toward the train station and stopped to have lunch at a place listed in the travel guide. The review looked promising and the food was good but it was a bit pricey. After lunch and a bit of shopping it was back to the train because the sun was already going down.

I’m sure there is a lot more to Pisa than just a construction error but it two visits to Pisa I haven’t seen it.

You can view the rest of the Pisa, Italy, November 2007 photoset on Flickr [flickr.com].