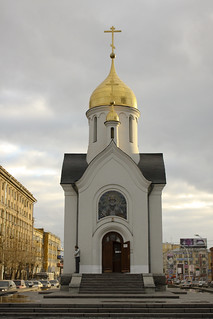 Novosibirsk [wikipedia.org], dead smack in the middle of Siberia, is not some place I think I would normally travel to. So, why did I go to Siberia… in November? Work. Unfortunately I showed up, so I’m told, in the three week gap of “nastiness between the beauty of fall and the beauty of winter.” That means something about the fall leaves color and the winter wonderland of permanent snow. When I was there everything was gray and mud, rain and wind. But it was not all that bad.

I actually spent most of my time in what could be called a satellite city to Novosibirsk, called Akademgorodok [wikipedia.org]. During the days of the Soviets this was the largest of a number of purpose built closed off towns filled with the brightest brains of the Soviet world. Akademgorodok is filled with large academies of every possible discipline; Math, Physics, Geology, Chemistry and the piste-de-resistance the Nuclear research academy. Wide roads, tree lined boulevards and parks must have provided a happy escapist world for the scientists.

Too bad it did not last. Since the end of the USSR Akademgorodok has seen better days. The end of government money funding pure research seems to have hit Akademgorodok hard. Recently foreign money has started to make its way in and local entrepreneurs have started a ‘Silicon Forest’ of high tech companies. 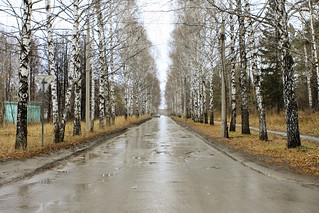 I only spent a single day in Novosibirsk itself—and a winters days is not long enough to see everything I wanted to see. But what I did see is an interesting hodgepodge of a city. I felt the same hectic uncontrolled pace that I felt in Shanghai. Novosibirsk is a city that has grown too fast to keep up with itself.

One of the things I wanted to see but did not get photos of is the Novosibirsk train station—a big stop on the Trans-Siberian Railway [wikipedia.org]. Unfortunately I did not get to take the train to or from Novosibirsk, it takes three plus days to Moscow or Beijing, the bosses thought that was too long. Oh, and it’s not cheap. I did see the big green exterior of the station, but it was after dark in a car on the way back to the hotel in Akademgorodok. So no photos. Maybe next time. 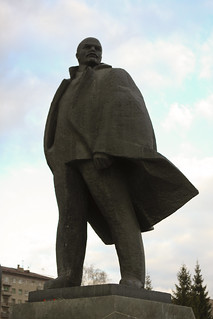 Speaking of the railroad, Novosibirsk has a rail history museum. Everything from steam powered pre-soviet era locomotives to trains make in Novosibirsk in the ’90s.

I did see the Nikolai Chapel, (sorry no link for this one,) once supposedly the geographical center of the Russian Empire. Now, not so much, the Kazakh border is only a few hundred kilometers south.

And what Soviet city would be complete without a statue of Lenin?

You can see the while Novosibirsk, Russia, November 2008 photoset on Flickr [flickr.com].