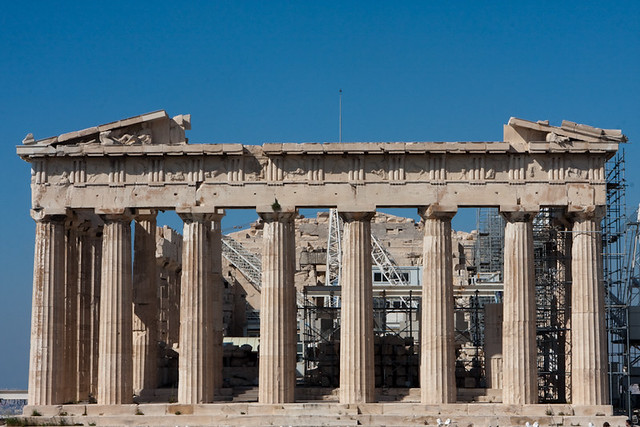 Candice an I went to Athens for a weekend in March. Why a weekend in Greece? Job interview. But the job is in Boston — don’t ask why the interview was in Greece it’s complicated. I did get the job, I’m in a hotel in Boston as I write this.

When we arrived in Greece the taxis were all on strike, luckily the train from the airport was still running so we could get to our hotel. But given that the city has gone from strikes and protests to riots and firebombs in the bast two days I guess it could have been much worse. 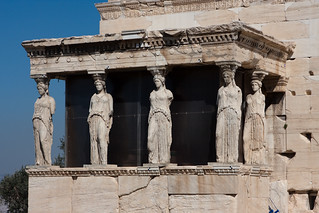 Flying in on Thursday night and out on Sunday afternoon makes for a short trip and throw in an afternoon for a job interview and we didn’t see too much. But our hotel was within walking distance of Monistiraki, the heart of the tourists sites and the Acropolis. Which was good because the Acropolis was the only “must see” on my list.

I’ve been to Athens before [confusion.cc], a bunch of the people I knew in London were from Athens and I spent a week there in the winter of 2001 [confusion.cc]. I have a lot of film photos from then. I’ll have to dig them out and take a look but in my memory they are actually better then the shots I have from this trip. For some reason the sun was just harsh and the scaffolding was everywhere! 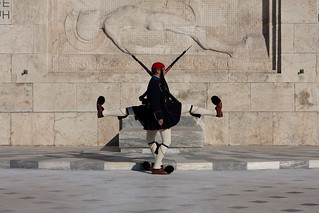 Really that’s about all the sights we saw. The rest of the time we enjoyed the local food and wondered around the tourist shopping areas of Monistiraki and Syntagma. That’s all the time we had. One day I’d like to see more of Greece than just Athens; the islands and the other big ancient cities of Delphi, Sparta and Olympia. One day. It’s all on the list.

You can see the whole Athens, Greece, March 2010 photoset on Flickr [flickr.com].