It’s been six months since I went to Harbin on a tour with my wife’s family. We just got back from another trip — to Hanoi, Vietnam — two weeks ago so I thought I should finally write-up the last trip before I work on the new one. The photos have been on flickr [flickr.com] for a while, just never got around to the blog post. 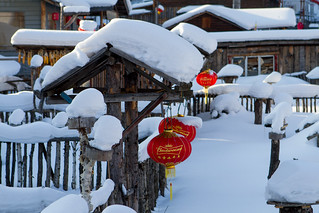 We went to Harbin [wikipedia.org] to be cold. To see snow. Snow there was, and cold also. Negative 30° Celcius. Damn cold. Well, the last day was -30°. But straight off the plane it was cold; -15° or so and -25° or less expected overnight. Our first stop was a local shop selling “proper” winter clothes — jackets, hats, “inner layer pants”, snow pants and boots. Even the guide said the quality is not amazing, they will last the week but you can just trash them or ‘donate’ them on the way out. Getting kids in and out of 4 layers of clothes all week was a trial of patience.

After acquiring appropriate attire, we visited Harbin Polarland. Arctic Foxes, arctic Wolves, a polar bear, penguins and a couple of beluga whales, all in enclosures too small. It was sad. There wasn’t much time left on the first day after that, the sun sets early, but we did visit St. Sophia Cathedral [wikipedia.org], a Russian Orthodox Cathedral — fun fact: Harbin was founded by the Russians [wikipedia.org] to manage an extension to the Trans-Siberian Railway. We also visited a section of the Songhua River [wikipeida.org]. No one was interested in skating or other frozen river activities. It was windy and, as promised, -25°. First day off the plane from Singapore that was too much. I did enjoy the sight of the Wal-Mart Supercenter!

The other major attraction near the river was fast food. The McDonald’s was closed but there was a local equivalent. The kids at chicken and french fries since dinner was underwhelming. Getting kids to eat was also a week-long trial of patience. Plain rice at set meals and instant noodles in hotel rooms formed the majority of their caloric intake all week. Supplemented with crispy roasted seaweed brought from Singapore. Nobody really liked the food, apparently Harbin has a reputation for bad cuisine in China so it wasn’t just us.

We only stayed in Harbin one night and early the next morning we took the bus to Yabuli Ski Resort. On the way there we stopped at a “traditional” farm for a horse-drawn sledge ride and fun with firecrackers. Between that the bus ride and meals that was the end of the day.

Overnight it snowed, not much but there was a enough to cover everything when we woke up. While other members of the tour went skiing or what not we enjoyed the snow making snowballs! We cheated and bought some snowball makers and made piles of snowballs. The snowball makers were a good investment as it was too cold to actually pack the snow without them, unless you were willing to remove your gloves… 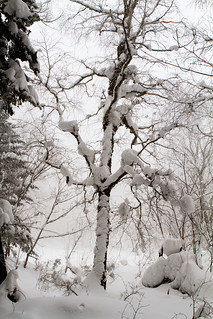 Our next adventure was the “Snow Forest” (according to the guide). After a few hours in the bus driving up into the mountains we arrived as a large gate make of packed snow leading to a small collection of cabins and entertainment — dog sleds, inner tube slides and food. And really loud music, including our theme songs “My Heart Will Go On” from Titanic (which was also played at Harbin Polarland during the Beluga Whale show) and “Let It Go” from Frozen, oddly appropriate, which we heard over and over the rest of the trip. But what we actually stopped for was a hike through the woods. The woods were beautiful, aside from a few caged animal “attractions” it was amazing. Until the guide left us all behind and we started to wonder if we were getting lost. The snow was deep enough and the path cleared so that we weren’t likely to get lost, except it was snowing and at times visibility wasn’t that great. The kids were tired and some people worried we should go back and not forward. In the end we caught up with the guide at the end of the trail. After that we just headed back to the bus.

Onward and upwards, higher into the mountains we went for an hour or so until we reached “China Snow Town”. It was typical China (my experience); we had to stand around in a waiting area while the guide dealt with entrance payments and paperwork, change buses with our luggage to smaller buses to go to the last kilometer (no outside vehicles inside Snow Town) and then walk and drag our luggage the last half kilometer to the hotel. Snow town is basically one long street and our hotel was right in the middle. The hotel was an experience! Either they remake it every year (the place is only open in the winter) or we just happened to go in a year when it was new/remodeled. Everything was new. All the furniture was fresh wood — it smelled like an idea shop — the toilet was new, the showers were new… new, new, new. And hot. Very hot. While outside it was -20° outside it was closer to 30° inside. If you came in from outside you were drenched with sweat before you crossed the (small) lobby. There was no way to avoid being drenched. Unless you were willing to use the lobby as dressing room to put on all your layer but you underwear.

Sleeping the Snow Town (at least at our hotel) is an unforgettable experience. I wish I could forget how hard the beds were. They we little more than boards. It’s like the hotel was an endurance test, sleeping on a board in a 30° room.

After surviving our first night, of two, We took an early morning trip up to the mountaintop; driving up the snow-covered road in an Inveco, I felt like I was in a National Geographic special about Siberia: 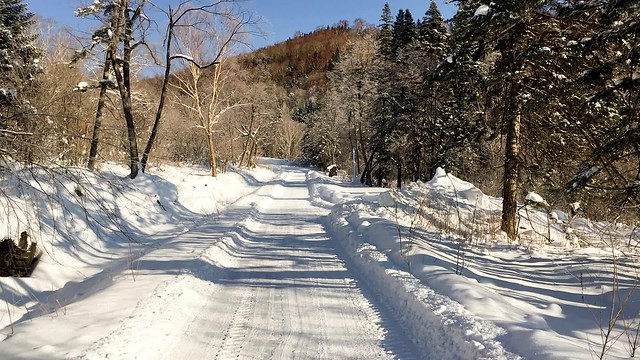 The snow on the mountain was more than half a meter deep. I stepped off the path while building a snowman and sank up to my waist. Stay on the path.

After lunch we visited the main attraction, the traditional Snow Town at the heart of Snow Town. We went in an hour before sunset so we could enjoy the day and night-time view. The traditional town, apparently it’s basically a movie/TV show set, is beautiful. Snow piling up on top of steep straw roofs. It was still early in the season so there was only 20cm or so of snow — I’ve seen photo of it closer to a meter thick on the roofs — but it was beautiful. However, it’s small. The traditional part is maybe 20m x 20m square. A couple of houses, a well and shrine with a big bell. That’s it. I stood around for almost an hour waiting for the sunset and the lanterns to come on to take photos. This was one of three times I felt really cold the whole trip standing around, taking my gloves off repeatedly to better use my camera and phone. It was bitterly, painfully cold.

After another hard night we spent most of the next day in transit. We didn’t go back to Harbin itself but to Daqing Lindian Hot Springs resort a few hours outside the city center. This was the kids favorite night – indoor heated swimming! My wife even dared to run outside to one of the outdoor hot spring baths for a while! I owe her $2 for that. It was a good relaxing night. I wouldn’t go out of my way to visit but as part of the tour, in the freezing winter, an afternoon of swimming in hot springs was nice. 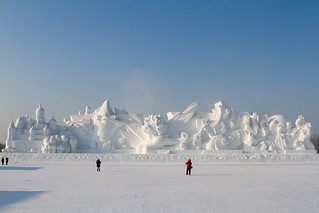 The next day was out last full day and we headed back to Harbin early and then to the main attraction. The whole reason to go to Harbin – the Harbin International Ice and Snow Sculpture Festival [wikipedia.org]. I don’t remember where I first read about or saw something on the festival but it’s been on my list of must see places for a long time. The festival is actually two different things, one Snow Sculpture festival and one Ice Sculpture festival in two different locations.

We started with the Snow Sculpture festival. Unfortunately while the festival is open, it’s not really in full swing until January or February and there were not that many completed sculptures. There was one massive, maybe 100m long, sculpture and they were working on 30m high castle, but a lot of things were still just rough, half carved blocks or pile of snow. Still what we did see was amazing and the snow sculptures were never the thing I wanted to see.

We visited the Ice Sculpture festival, like the traditional Snow Town, an hour before sunset so we could see it during the day and lit up at night in all it’s glory. And it did not disappoint. Despite being the coldest day; below -30° it was a magical experience. The ice sculptures, really buildings made of massive blocks of ice cut from the river, are amazing and lit from the inside in a rainbow of colors. Tragically the kids missed it all, between the bitter cold and not wanting to get all their gear on they decided to stay on the bus and miss out on the Ice Sculptures. Words cannot do it justice, put it on your bucket list. 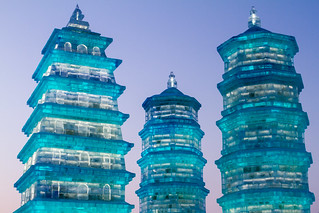 The last thing we did before sleep and a pre-dawn flight was dinner in an ice palace. Chinese steamboat in a building made entirely of ice next to our hotel. And steamboat lives up to its name under those conditions; a boiling pot of broth in a room made from ice. Steamy.

Overall Harbin was a great trip, not sure I’d do it again but as a once in a lifetime trip it was worth it. China is hard, and much of the bitching above is just a difference in expectations and culture I suppose. Harbin, while it’s a big city in absolute terms, is a bit off the beaten path making it that much more so.

You can see my whole Harbin, China, December 2015 photoset on Flickr [flickr.com].