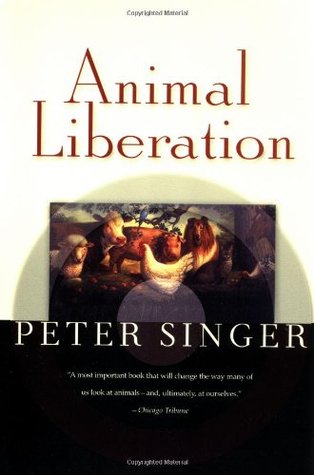 Animal Liberation is credited with launching the animal rights movement in the industrialized world when it was first published in 1975 by the then relatively unknown, Peter Singer [wikipedia.org]. You can blame all of the illogical stupidity of PETA [peta.org] on this book. But PETA’s antics tend to blind people to any logical discussion of the real points in Animal Liberation. Singer does not support the animal rights movement epitomized by PETA but holds many of the same views, referred to as speciesism [wikipedia.org], based on a logical examination of the practices of the industrialized societies in their use of animals. The examination is based on Utilitarian morals and ethics and you have to read the book with that frame of mind, even if you don’t agree you have to be open to utilitarian ideas, to understand some of what Singer is talking about.

Most people in the industrial world are far removed from how their food is produced and how their beauty products or drugs are tested and approved. This blinds many people to the true magnitude of the use of animals in sustaining or modern standard of living. Animal liberation strips off the blinders and exposes the realities of our system of animal exploitation. Animal Liberation is an academic book on ethics but is also in-your-face and readable.

I first read Animal Liberation when I worked in the fish store back in C’ville. One of our regular customers was a post-doc biologist at the university. She came in one day to buy 100 Zebra Danios to be used in an experiment. I’m not sure now what the exact nature of the experiment was but J████ argued with her and said he would not sell them to her if she was going to ‘cut their heads open and stick electrodes in their brains.’ J████ continues to argue by asking her ‘have you even read Animal Liberation?’ to which she responded, ‘yes, have you?’ The only thing J████ could say was, ‘um. No, actually.’

Even though J████, J███ and myself had, for a time, been vegetarian neither J████ or I had read Animal Liberation yet and I’m not sure if J███ had finished it yet. We’d become vegetarians based on discussion of the principles in Animal Liberation with several of our customers and friends, including a ethics teacher at the university. This was when I picked up my first copy of the book, figuring that I could not speak intelligently about the decision I had made, could not even justify the decision unless I had actually read the book. I’m glad it was J████ and not me that got caught on the soap box without being prepared.

If it’s hard to imagine going vegetarian or vegan read Animal Liberation and then think about it. It’s hard for anyone I’ve meet to read Animal Liberation and not change their lifestyle in some way. Not everyone goes vegetarian or vegan but they all change some, the arguments are compelling and the images and examples of humans use of non-humans are graphic and disturbing.