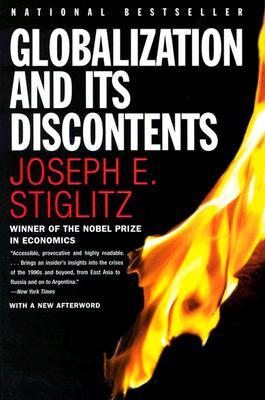 I picked up Joseph Stiglitz book in the same purchase I got Naomi Klien’s No Logo and Peter Singer’s One World. Obviously there is an interest in globalization in that recipe. I’ve been reading The Economist [economist.com] for some years and been mildly informed on globalization and the backlash against it evident in the protests against the IMF, World Bank, G7/G8, WTO and other multinational bodies associated with it. I didn’t really develop an interest in globalization until I read The Best Democracy Money can Buy by Greg Palast.

Palast’s book wet my appetite but Stiglitz, who was President Clinton’s economic adviser before joining the World Bank, really lays on the blame. He places most of the blame for the Asian Financial Crisis, the Russian collapse, and Argentina’s Defaulting, on the IMF. More specifically he claims that a shift away from the Keynesian ideas that the IMF and World Bank were founded on is to blame. What caused the shift? The introduction of Thatcherism and Ragantonian ideals, the ousting of experienced economist and the promotion of free market fundamentalist at the IMF.

To support his accusations Stiglitz roams around the globe from one crisis to another pointing out the faults in the blind, ideological, one-size-fits-all prescriptions the IMF doled out to country after country in the past 25 years. Time and again the IMF’s blind belief in the Market becomes a vehicle for greed and capitalist hegemony. To back up the point that the IMF refused to learn from it’s mistakes and the experience of others Stiglitz points out several countries that refused to follow the IMF plan, and shows that while their development has not been as smooth as could be desired and they have not developed as fast as the IMF says they could, they have avoided the painful problems of many of the IMFs poster child countries: Thailand, Argentina, Russia. And stand better today than many of the countries who followed the IMF plans.

I found the section of the Asian Financial Crisis the most poignant because shortly after I finished the book I traveled to Bangkok, the epicenter of the crisis. The problems that began in Bangkok when Thailand opened it’s market to ‘hot money‘ [wikipedia.org] are always recalled as something that happened ‘over night.’ How true those statements are really became apparent when I was in Bangkok. The skyline is filled with half completed skyscrapers and rusting cranes that have sat empty since 1997. Many construction sights literal closed the doors one night and never opened them again, putting hundreds of workers on the street over night.

After nearly a decade Bangkok is just beginning to recover from it’s nightmare. If Stiglitz is to be believed the IMF leadership, which shares a large part of the blame because it pushed questionable policies faster than was advisable and without tailoring them for local conditions, has not learned its lesson. Stiglitz acknowledges that the goals of the IMF, the goals of Globalization, are not inherently bad, and need not lead to the problems that we have seen. Rather it is the way the IMF uses it’s political power and money to force these ideas on countries that are not ready for them that has lead to so much suffering and poverty.

Globalization is not a new movement, it is the as old as civilization. It is the force that sent caravans down the Silk Road and the wind that launched the Niña, the Pinta and the Santa Maria across the Atlantic. The goal now should be to move forward in a way that does not destroy entire societies so that a few rich people can get richer. Modern globalization was sold to the world as a way to bring the worlds poor into a better world. It has, to a large extent, made many of their lives worse while being hijacked to make the rich richer.