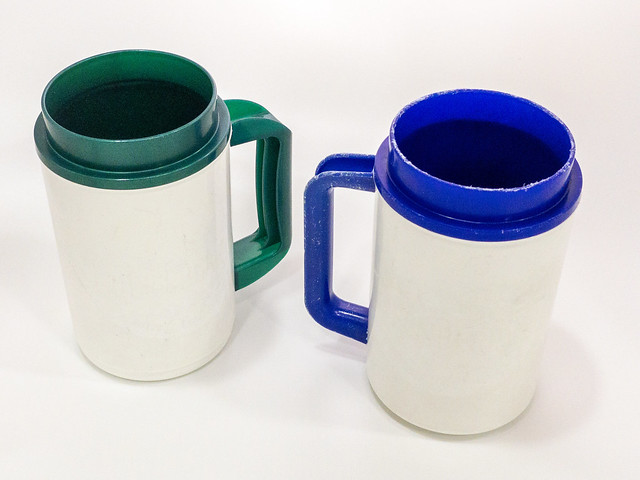 These are my Greenberry’s mugs. I got these mugs 25 and 23 years ago. The older one, the blue one, I got at the start of my senior year the year my caffeine addiction really started. That year I had early morning honors English at 7:30AM, and after school I was working in Ponderosa in the kitchen. To get to school on time I had to get up about 6AM and I usually got home around midnight. So, even if I didn’t do all —or any— of my homework, I got about 5 hours of sleep a night. Even those night I didn’t work I was usually out with friends or watching movies and playing games in the basement. So I can’t actually blame it on work but…

I don’t remember how I discovered coffee, I had never liked coffee before. Although to be fair coffee before was nuclear sludge at my moms office, no one in my house drank coffee at home, we were a tea house. In any case I became totally addicted to coffee over the course of senior year. This was before the Starbucks invasion, at least in Charlottesville, so there were few coffee shops. My favorite coffee was from the Mud House on the downtown mall. My friends and I used to gather there many evenings to attend the jam sessions and slam poetry; even days I had to work I would often stop by before work. I think there is still a Mud House mug at my mom’s house, it’s a smaller plastic mug that still has the yellow and orange Mud House griffin on it.

The Mud House was my favorite but I drank Greenberry’s more often for two reasons: one, the mug is bigger, and two, Greenberry’s was on the way to school. So I could start my day with a quad-shot latte. And some how my English teacher still had to tell the girl next to me to wake me up when class ended most days. I sat in the back next to a wall covered in one of those green chalkboards, I slept with my head leaning against the chalkboard, not even trying to fool the teacher. Not sure how I managed to pass that class with a good grade.

By the time senior year ended I think I was drinking two rounds of quad-shot lattes a day, plus Mountain Dew at lunch time and a couple of glasses of Coke or Dr. Pepper at work (it was free for staff). So I was totally hooked on caffeine to say nothing about the excessive sugar intake from the sodas. After school ended it shifted more to coffee but still, I was drinking the equivalent of 12 or more espresso shots a day!

This continued for a few years, somewhere along the way I got a second Greenberry’s mug so one could be at home in the wash while I had the other. Then, in 1999, while I was going through a phase of self-improvement —the same one that turned me vegetarian— I quit caffeine cold turkey for a year. No coffee, no soft drinks, no caffeine period. Also, this is where I developed a habit of drinking water, I had always had water at school and at home —until they added chlorine to our well water making it nasty— but outside tap water at home and drinking fountains at school I was used to drinking sweet tea or sodas with meals. To cut out caffeine and at the same time limit sugar I ended up on mostly ice water.

When I quit I suffered. For about a week I had splitting headaches and issues concentrating and staying awake. I was generally miserable for a few weeks. But I adjusted and eventually by 2001 I started drinking coffee again, and (diet) soda. Coffee was driven by college, sitting around drinking with friends on campus and in DC on the weekends. Soda was because there was a fridge filled with it at work —the perks of being a software developer during the dot com boom.

As an aside, my favorite coffee shop in DC was XandO’s, which later merged with Cosi. Other than coffee the best thing at XandO’s was the s’mores. A plate of gram crackers, marshmallows and chocolate bars with a flaming tiki statue in the middle. Wish I had a photo of that!

These days the main tipple in my Greenberry’s mugs is ice water, it’s almost all I drink at home. Usually one or two mugs full a day. The insulated mug works well, keeping my water ice cold long enough for me to finish it and the size is great. My wife keeps telling me to get rid of the mugs, especially the blue one as it is all ragged around the lip. But this style of mug is not something you can find these days, everything is more fancy. I don’t know, maybe I’ll get a couple of nice insulated metal cups from Starbucks or The Coffee Club one day but for now my Greenberry’s mugs are still precious to me.